For Megan Wyatt, owning and operating Wit & Whimsy Toys in Granite Bay, California has been a dream come true. Her first job was at a toy store when she was 16, and in the four years that she worked there, one of her major life goals was solidified: own and operate her own toy shop. Despite the hectic seasons–and the 12-hour shifts during the holidays–Megan never questioned her belief that it was the best job there is. For years, life circumstances and other career pursuits stood between Megan and business ownership. But a job loss at the beginning of 2020 caused her to reevaluate her path, and she turned to the Women’s Business Center (WBC) to figure out what it would take to make her dreams a reality.

“I was lost for a little bit at the beginning of 2020,” explains Megan, who had previously been working as the marketing coordinator at an environmental firm. “But some friends own a store in a shopping center, and kept saying how great it would be if a toy store opened in the vacant spot next door.” 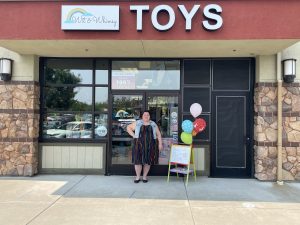 Usually, Megan would answer the friendly encouragement with vague apprehension. “My response was always ‘maybe one day, maybe after I do xy or z’,” she says. “But every excuse I gave, they had a work around!” The possibility of starting a shop that focused on high-quality, educational toys, gadgets, and games for customers of all ages began coming into clearer focus.

Eventually, after receiving a recommendation from a friend to work with California Capital to explore the first steps of opening a business, Megan contacted the WBC and was connected with a business counselor. She began working with Charles Thomas, who has helped hundreds of clients across industries start or grow businesses.

“[Charles] really went to bat for me,” says Megan. “He was instrumental in helping me create a business plan, and helping me determine what to consider to begin the process. I had no idea where to start.” 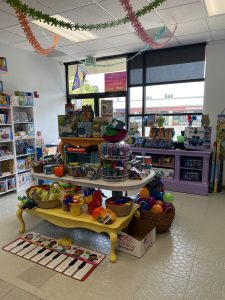 Wit & Whimsy Toys opened their storefront in Granite Bay, CA, in November of 2020.

This was in July of 2020, and there was much to do. But working with Charles, as well as WBC Business Consultant Danielle Marshall, Megan spent the summer and early fall nailing down her business plan, learning cash flow analysis, and negotiating a lease for the storefront next to her friend’s shop. Early on in her entrepreneurial journey, Megan made the decision to “bootstrap” the business, meaning she would build it up without taking out loans or securing outside funding. Through personal investments, she and her husband were able to secure a storefront and build up their inventory for a grand opening at the beginning of the holiday buying season.

They opened the week before Thanksgiving of 2020, and their customer base caught on quickly. “I think our biggest accomplishment so far is the customer base we have built. I was really surprised by our sales last Christmas, despite only having been open for six weeks,” Megan says, reflecting on the last nine months.

Continuing to work entirely off of revenue and personal investments, Megan and her husband have doubled the inventory of Wit & Whimsy Toys, and made significant improvements to the store front. The customers notice, Megan asserts, and they continue to be the driving force of the business. 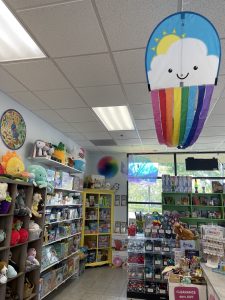 Wit & Whimsy Toys has doubled their inventory since opening in Fall of 2020.

“We have such a great community of supporters,” she says. “They have helped us partner with Little League teams and local schools for partnerships, and any time they share us on social media, it results in a big new batch of customers.”

Moving forward, Megan’s immediate goal is to hire new staff. She currently runs the shop 7 days a week with help from her husband, and knows that extra support will be needed entering into the holiday season. Five years down the road, she hopes to be able to upgrade to a storefront with more square footage.

Little over a year ago, Megan Wyatt began building her business plan from the ground up, taking advantage of the free resources available through the WBC–and thanks to her determination and this strategic partnership, there is now one more small business serving its community.