May 17, 2022 | This morning, California Capital Financial Development Corporation met a delegation of representatives from the National Assembly of Kosovo for a conversation on expansion of women’s economic participation and business development models. The delegation, whose trip was made possible through the Open World program of the Congressional Office for

“Supporting microbusinesses can look different across cultures,” explains Deborah Lowe Muramoto, President of California Capital. “But we learned that the need for more people–particularly women and ethnic minorities–to successfully enter the workforce is common between Kosovo and California.”

With the issue areas of particular importance to the visiting Members of Parliament including gender equality, microbusiness, and minority rights, the conversation focused on how California Capital’s technical assistance and lending programs are designed to serve and grow women- and minority-owned businesses. 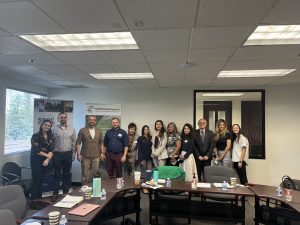 Kanaan, provided insight into specific programs–such as Licensed to Care–that provide culturally competent training to empower women to open and operate businesses. For their part, the representatives of the delegation, who were joined by a bicultural/lingual facilitator and an interpreter, shared context of the types of businesses that women in Kosovo typically own, and the ways in which the government supports microbusinesses in the country.

“We were honored to host this meeting with representatives from the National Assembly of Kosovo,” says Lowe Muramoto. “Any opportunity to share information and learn from others is one we are grateful to accept.”

It is clear that, while systems and economies may differ, entrepreneurship is an important area of opportunity for populations around the world, and conversations like today’s are crucial to expanding the positive impact of business ownership.

More than 30,000 current and future leaders from post-Soviet era countries have participated in the Open World program. Open World offers one of the most effective U.S. exchange programs to promote mutually beneficial options for depolarized engagement between future national leaders. It is a unique but no less powerful tool for Congress to engage legislatures in critical regions of the world.

Global Ties Sacramento influences positive global change and fosters mutual understanding through the facilitation of professional, cultural, and educational exchanges. Connecting international leaders with the Greater Sacramento Region, they provide opportunities for people from around the globe to engage in meaningful dialogue, build relationships, and create a more peaceful world. Global Ties Sacramento is a division of World Trade Center Northern California, and a member of the Global Ties U.S. network. Global Ties Sacramento is the only organization of its kind in the Greater Sacramento and Central Valley regions. On an annual basis, Global Ties Sacramento hosts over 400 international visitors, contributing over $550,000 to the local economy through hotel stays, dining expenditures, and participation in cultural activities. In addition to the economic impact, their work expands cultural fluency, showcases global perspectives, breaks down barriers, and provides citizen diplomats the opportunity to shape and advance foreign policy goals.

COIL, a Support Agency of the Congress

Founded in 1999 by Congress, the Congressional Office for International Leadership (formerly known as the Open World Leadership Center) maintains a vast network of more than 30,000 alumni in strategic countries including Russia, Ukraine, and others in the Balkans, Caucasus, Central Asia and Eastern Europe. It’s Open World program supports legislative diplomacy efforts for Members of Congress by conducting exchanges that establish authentic communication and enduring relations that are maintained through its extensive alumni network. Program participants are provided with exposure to the work of Congress, American politics, accountable governance, and volunteerism while being home hosted by American families. To learn more about the Open World program, please visit https://www.openworld.gov/.